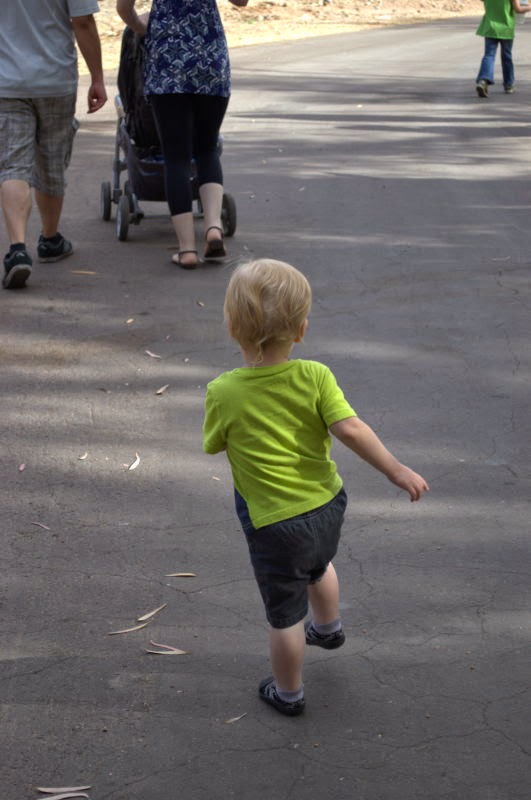 Ummm... again I ask, where has my baby gone?  (And again and again I shall ask for the rest of forever... it's a mothers right). One moment I have a tiny sleeping baby in my arms and the next I have a wild, talking, running, playing toddler on my hands!  How?  When?  I don't understand! What is going on here?!?

I'm tempted to say it's not fair and I am ready for him to stop all this growing at once, please and thank you!  But that's not really true.  I love it and it's wonderful and just exactly what it should be.  I feel so blessed to be a part of his growing up.

Look Who's Talking
The signing is awesome but it is so much fun to watch him learn to communicate with his voice. He still signs many of the words he says at the same time but I think he is starting to feel confident that his words are pretty well understood and is starting to slowly drop some of his signs.

**We have a Sesame Street book about moving your body  with things like "jump up and down like Elmo" and "shake a leg like Grover". One of the pages is "make a muscle!" and so you can imagine the gesture we do when we get to that page.  He made the association all on his own to Mussels the food. Believe it or not he eats and enjoys shellfish like shrimp, scallops, oysters and, yes, mussels. It is not the American Sign Language sign for mussels, it is his own sign.  But I know what he means so I'm counting it!

Whew!  This boy has things to say! He still signs a good deal but the number of words he signs only is dwindling.

"Daddy, fix it!"
I guess I have said to him enough times, "We will have to ask Daddy to fix it" (to replace batteries in a toy or something along those lines) that now he believes Daddy can fix anything!

The other day one of his crayons broke in half and he came to me and said "Broke, Daddy!".  Another time I told him something was broken (I don't remember what) and he picked it up and started signing and saying "Daddy! Daddy!".

Mr. Papa is that kids hero!

"Whoa!"
Mr. Mister has always been one to balance.  He will scoot right up to the edge of your knee or his chair or wherever he is and find that point where he needs to fight to keep his balance.

Recently in this sort of situation, that he himself created, he has started saying "Whoa!".  He will say it in other situations as well but especially when he is finding his balance.  It is just so darn funny.

Big Car
We got a 20+ year old BMW as a second car recently.  Mr. Mister calls it the "big car".  Not sure exactly why. It's just a nice family size car and we are pretty happy with it.

Mr. Mister is very fond of the "big car", I think because he can see out the windows much better than the other car.

He normally gets so excited when we pull into the parking lot at the park or library or my sisters neighbourhood or some place he recognizes.  Not when we are in the "big car"! In that car as soon as we park he cries and says "More! More car!".  He loves it!  Such a difference from when he was a baby and cried non stop any time he was in the car ever!

Family
This sweet boy loves to spend time with our family.  He talks about our family and recognizes everyone in pictures.  When we tell him we are seeing our family he gets so excited!  We know for sure because he tells us by signing EXCITED! He also signs LOVE and FAMILY when we talk about seeing any of our family.

After a get together with any of our family you can bet we will be talking about who we saw and what we did for several days.  He brings it up with his signs and we do our best to talk with him about all the fun things we did with our family and go through all the details with him.  He loves it!

He has a toy snake that is cousin gave him from a kids meal one day when we were all together.  He will start signing COUSIN and saying his name when he finds that snake in his toy box. One day he suddenly came to me and signed SNAKE + COUSIN + WHERE?.  He was thinking about his cousin and wanted to play with that toy to remember him!

My Mom always lets Mr. Mister play with her phone when we are together. He has a special fondness for anyone who will let him play with their phone.  But my Mom's phone is special because it has some good music on it he likes.

Especially the Passengers album and especially the song "Let Her Go".  When he hears that song on the radio or in a store or anywhere he immediately starts saying and signing "Mimi!".  It always makes him think of her.

Pretend Play
I have really seen his pretend play start to pick up.  He will do things like pretend to cook and pretend to go to work by picking up Mr. Papa's lunch bag and walking towards the door saying "Bye!" and signing I LOVE YOU.

We recently set up this great fire house toy we got as a hand me down from his cousins.  It is basically a doll house for boys complete with kitchen and bathroom and office as well as a basket ball court and fire poll.

I thought he was still a little young for it but he plays with it often.  He will play with the fire truck and helicopter but he also sits his little firemen dolls down for dinner and pretends to eat himself with them.  He also sets them up in the office with the computer and I have even seen him pretend to type on that tiny computer himself.

It's so great!  Such an important way to play!  It makes me so happy!

Ah-hop!
When we first introduced the HELP sign he used it to ask for help from us.  It has probably been his most used signs and one of the most helpful in reducing frustration for everyone involved.

Recently this sign (and word!) has evolved to include the meaning of "I want to help you!".  If I am doing dishes he almost always come into the kitchen squeeling "Ah-hop!" while signing HELP.  I want to help you!  He likes to help me with laundry and throwing things in the trash as well.  I try to include him in what I am doing and think of ways he can help me as much as possible because he loves it so much!

I certainly want to encourage that wonderful helpful attitude instead of brushing him off and making him feel he is in the way.  It can be even more work for me to make sure he can "help" but I think it will be worth it in the long run.

A-ho-me!
Mr. Mister is a snuggle bug for sure and a little bit on the needy side.  I hate to phrase it that way.  He is affectionate and close physical contact to those he loves is important to him.  It is perfect and just the way he is. Just exactly the way he should be.

It is just so darn sweet (and I'm not going to lie, sometimes frustrating, I only have so many hands) when he toddles up to me and reaches up while saying "A-ho-ME!" with extra emphasis on the "me" part.  Translation: Hold me!  Pick me up!

This didn't make it on my list of words above but you better believe he said it multiple times yesterday.  He likes to walk and get around on his own, to a point.  But sometimes he just needs to be held!  I know that one day he won't need me in this way and I will look back on this fondly so I try to enjoy how wonderful and sweet it is.


He is one amazing kid.  I am such a lucky Momma!